In the psychedelic shared hallucination of cyberspace—Mainframe—AI programs roam freely. Self-replicating and self-editing, they've turned our shared online consciousness into a deep dream, observing us to simulate anything we might want to do in the digital playground we now inhabit.

Mainframe is a cyberpunk hack of Tunnel Goons in which you play as mercenaries who specialize in hunting down and capturing or deleting corporate AI programs. You have no body, your consciousness permanently wired into Mainframe. Each session is a mission to find and deal with one of these programs.

Explore the never-ending surreal servers of Mainframe as you fight to stop megacorporations from taking control of cyberspace entirely.

Inspired by the Witcher, Neuromancer, Counter/Weight by Friends at the Table, and Yokai Hunter's Society, this game is about exploring a strange version of cyberspace, digging into Megacorps' dirt, and scrounging for work in gritty neon world.

Your purchase of this game includes:

Mainframe is a Tunnel-Goons-based cyberpunk trpg about hunting rogue AIs through a vast simulation.

Plotwise, the hook to Mainframe is more Matrix or Control than it is Blade Runner. Humanity made a gigantic shared simulation, corporate interests released a bunch of AIs into it, the AIs self-replicated, and now no one really knows what's lurking in the depths of the simulation.

Gameplay-wise, Mainframe has a nice crunch to it, but ultimately it's designed to be easy and flexible. You have stats and HP, as well as programs and cybernetics, and your currency is RAM. RAM is a small pool, but you can use it to buy things on the fly, generating items when you need them. Similarly, cybernetics have vague, non-specific functions until you tell the GM what yours does, permanently giving the cybernetic that capability.

This focus on generating things as you need them keeps the story flowing smoothly forward. The dice themselves are simple---roll 2d6 against a range of DCs that starts at 8. Match or exceed the DC and you succeed.

There's a lot of ways to get small bonuses, and helping a teammate adds a d6 to their roll, but with 8 being the Easy difficulty and bonuses not usually being more than a point apiece, GMs may want to avoid the upper end of the difficulty spectrum entirely.

GMs may also want to be careful with how often they call for rolls, as every time your two dice come up with numbers that are more than a few points apart, you cause a glitch. Glitches aren't objectively good or bad, they're up to the GM's whim, but they make your environment progressively stranger until they've completely bricked the local laws of physics.

Combat in Mainframe is simple, with rolls against a DC and damage dealt based on how much you exceeded or fell short of it. However, death is interesting in that it instead causes you to reboot and remember something from before you were part of the simulation. This is a really cool flourish, and it takes a lot of sting out of the potential swingyness of the dice in fights.

For GMs, a lot of tools and advice are provided, including a system of clocked used for tracking in-game time. There's a really helpful random chart for generating servers, there's sample servers to toss pre-made into your game, and there's a neat bestiary with extremely flavorful entries to boot. There's a mission generator tucked at the end, and bits of detail about what the gameworld looks like peppered throughout.

Overall, if you like the surreality of 90s era depictions of virtual landscapes, if you want a cyberpunk game that leans all the way in on the cyber, if you want a chaotic and flexible ruleset, and if you *maybe* want to dig into the setting's meta surrounding the origins of the PCs and the status of the world outside the simulation, you should pick this up.

-Page 25, Helping characters on rolls is very strong, and there's no implicit drawback to doing it, so that d6 helping bonus becomes a thing players are mechanically incentivized to fish for whenever they can.

-Page 27, Synch and Hit Points are both talked about here. Are they the same thing?

Just played this game and loved the story and characters we developed. Also truly a sucker for some eye-catching art!

This game is very pretty and very good. 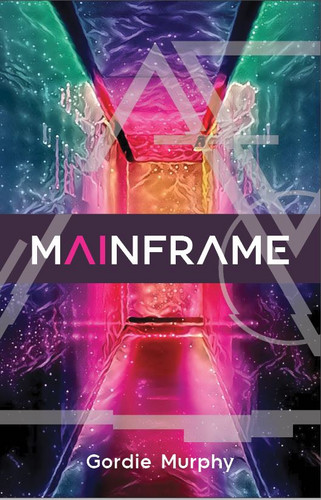 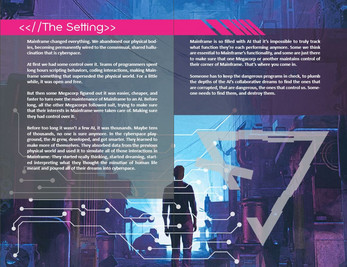 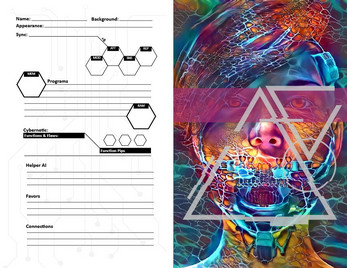 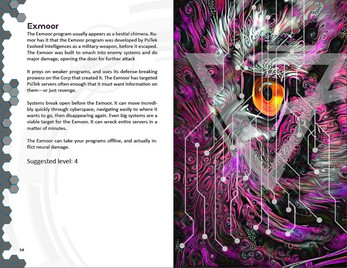