In Apotheosis, 2-5 players will explore the relationship between a culture’s history and their dominant cultural story as they create and change a legend over the course of generations.

Your goal as players is to tell an interesting story about the culture you’ll develop, and to tell their dominant story in turn. You’ll be telling this story collaboratively: each player will be roleplaying as an abstraction of the culture, not as specific characters.

You’ll create and develop the basics of the culture together, seed their original dominant legend, and then watch that legend change as major historical events occur. This is a game about the relationship between what a culture experiences, and how they represent that in the stories they tell each other.

Playing this as the very first game for our podcast was such an experience. Myths and legends changing with the world and being reshaped and retold, it was unique and I think really helped set the tone for our podcast.

So from the bottom of all of our hearts at Hope's Hearth, thank you for writing such a wonderful game and helping shape the stories we've told going forward.

I ran this recently for a group of mine and it was delight! It took a little bit of time for everyone to get used to the sort of 'open discussion' style, especially since one of my players was brand new to games, but once we got going it was incredible.  The different player actions  give plenty of flexibility about what they could do to the myth, and the different generational beats gave  a nice background without being restricting.

The story we ended up telling tracked a group of vaguely 12th century Basque peasants as the spring that fed their village dried up. Their holy creation myth turned into a life and death struggle between the Whale-God of Storms and the Eels who started as minions but turned into avenging angels. The peasants eventually started an Eel cult though so, maybe not the best developments overall.

Either way, the game was super fun and I'm really looking forward to running it again!

That sounds awesome, so glad you enjoyed it!

This was such a fantastic and unique game. I used it for an arc exploring a character's cultural history as part of our larger campaign and it really added great depth to our worldbuilding.

We started with cultist space pirate communist gnolls and ended with crashing into Disney Castle. 10/10 game of the year.

Apotheosis is a serious contender for best first page in a game.

I'm not going to spoil it, but the first page after the table of contents is the strongest cold open I have ever seen to a system, and somehow it's nonfiction to boot.

It's worth $5 alone, and the game gets better from there.

Overall, Apotheosis is about stories and language and how those things change---but whereas I bounced off of Dialect (which uses a similar premise) like a rubber ball off a brick wall, I got four pages into Apotheosis and was stuck fast.

Apotheosis knows that it's a lore generation game, and it doesn't bog itself down or force roleplay. It gives you a clear explanation for what it's doing, then shows you with simple, direct steps how to play.

So, if you nerd out about storytelling, folklore, culture, and history: get this game. If you want something quick and easy to play that lets you just improvise a culture and a history for about an hour, get this game.

It's not crunchy, so if you're averse to purely story games, this is probably not what you're looking for, but I'd strongly recommend it otherwise.

Also, although it has only one art piece, it's a really good one, and the layout is super strong and clear.

-Page 5, "a culture is define" defined

-Page 6, "We value those who respect the planet" the end of this sentence is missing a period

Wow I'm humbled... that's such high praise! So glad you liked it, would love to know what kind of legends you come up with.

Played this game for the first time after getting it in the giant bundle. It is well worth picking it up! We ended up creating the bible but backwards or maybe just Noah and the Ark but if the Ark was a train. It's really easy to play even over voice chat and just using google docs if you don't have rpg friends in the area or because of quarantine. I can't wait to play it again!

Thanks so much, I'm glad you liked it! The story you came up with sounds really cool. If you play online again, would recommend looking at a free Trello board, lets you move stuff around and organize it in a nice way.

My friends and I found this browsing through the massive bundle and started playing today. We love it so far and are excited to start the second generation in our next session. Thanks for making it!

Thank you, glad you're enjoying it! Let me know how your game turns out, I'd love to see what you come up with!

It turned out great and we loved the game, thanks again!

Here's how our legend ended up: https://docs.google.com/drawings/d/1d9rAgAQOpSLrMbX9ydxJgglitUVTo5AEM6i5eLGjIiY/...

Apotheosis is a game that explores how a legend is changed over the generations. It has a Microscope-esque mechanics, where parts of the legend are written down on index cards. As time passes, the culture of the storytellers changes, and parts of the legend get added, changed, removed, or even splinter into multiple versions. In the end, your culture may not survive in the flesh, but the legend persists, even if it is changed completely from its original form. 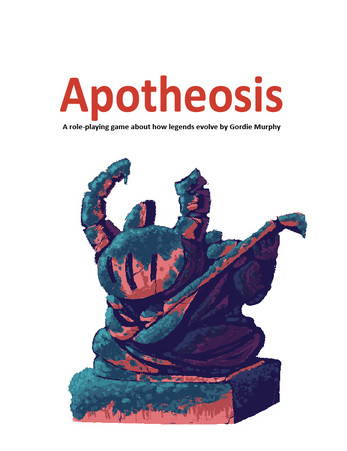 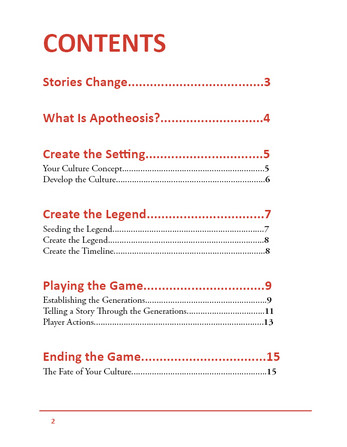